Why employees switch off (and don’t even know it)

we’ve all inherited a paradigm in which…

…people are reading internal communications and sometimes find themselves wondering: “Hang on, is this talking to me, or to someone else?”

People have long talked of the importance of Employee Engagement. But most people seem oblivious of the fact that many internal communications actively disengage employees. This happens not so much because of the content but thanks to the way that content is expressed. Let’s just do a quick reality check here.

Have you ever read an internal communication and found yourself wondering if what you’re reading is talking to you (even though you initially thought it was)?

Does that ring any bells at all?

Just about everyone, it seems, has had this experience at some point. In fact, most people say it happens a lot. And when it happens, they tend to switch off – and the communication in question fails. But what makes people switch off like that? How often does it happen? What are the consequences? And what can you do about it?

We’ve identified nine ‘triggers’ that can switch employees off: disengaging them from the words their reading (or listening to if it’s a presentation). Two of these: ‘jargon’ and ‘waffle’ have long been recognised, not least because employees tend to be consciously switched off by them.

But the other seven are more subliminal, and people’s decision to disengage is, at best, semi-conscious. Indeed, when we’re teaching this stuff, many of our students realise, after the fact, that they’d become disengaged without any conscious awareness of it happening.

One of these seven triggers comes from the communication trying to talk to more than one audience. Any time the subject matter is directed at just one of those audiences, people in the other audience(s) have no option but to switch off. Naturally, this is something your briefing process needs to tackle.

The other six triggers are linguistic.

How come the triggers exist

When reading anything, you can do so from any one of three different perspectives or ‘positions’. None of these is right or wrong, in an absolute sense. But each can affect how you respond to the words in front of you.

People often adopt this position when, say, filling in an employee survey, which might include something phrased along the following lines:

‘I believe this company cares about its people’

Because this statement written in the first person (‘I’) its phraseology is designed to make you feel that it is you who’s written the very words you’re reading: in short, that you are the communicator. “These words are ‘coming from’ me.”

And it’s kind of OK in that context, because the people who created the survey want its recipients to communicate their answers back to them. (But in other contexts it can go horribly wrong.)

In this position, you do not feel that you have written the words, but that someone else has done so, and that those words are being said to you. Inevitably, then, this is the position employees need to be in if they’re going to be taking or avoiding actions as a result of having read an internal communication. 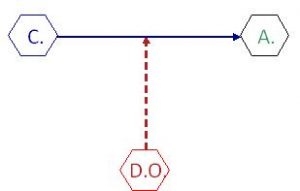 This is the position employees tend unconsciously to step into when, for example, they’re on a ‘copies’ list for an e-mail. It’s a fly-on-the-wall position, which, when you adopt it yourself, will make you feel as if you’re eavesdropping on a conversation between a communicator and an audience to which you don’t belong.

Of course, you might decide you want to be involved, but you weren’t being directly told to take that action. So – and this is the critical point here – people in the Detached Observer Position tend not to do any actions mentioned in the communications before them (assuming they’re even paying attention at all by that point). So the communications fail with those employees. And we’ve already discussed the potentially huge costs that lie in wait if that happens.

So this is a really big deal as far as internal communication is concerned because the seven unconscious ‘Disengagement Triggers’ can push people out of the audience position, and turn them into Detached Observers.

There are five major consequences:

Which position will someone be in when approving a communication? Who knows? So what happens if:

What are the chances they’ll all have the same ‘gut reactions’ to the words in front of them? Interesting, huh?

And ‘positioning’ is just one of five different unconscious processes people can do differently when approving communications.

So these Disengagement Triggers have significant implications for organisation when it comes to your ensuring its language standards and approvals process are DFVP.

And we’re currently offering free workshops which will help you understand more about making this work for your organisation. We’ll set it up to run at a time to suit you and anyone you want to invite. It will:

Why you have a moral obligation to be living the dream

Why we need to agree a common definition for internal communication

A demonstrably valid purpose for IC

Why everybody struggles and it’s no one’s fault

Why IC Practice Leadership is worth a fortune

Why the PR and Marcoms models always fall short internally

Why ‘Skills Training is a myth

Why every organisation needs this new paradigm